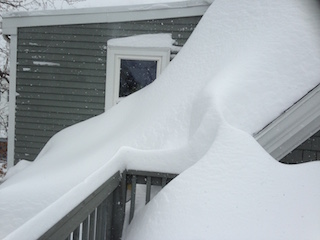 This was the view of our condo unit from on our 3rd story back deck. Yes, the 3rd floor is approximately 25 feet above ground level. That's a snow drift after we had had over seven feet of snow in one season. 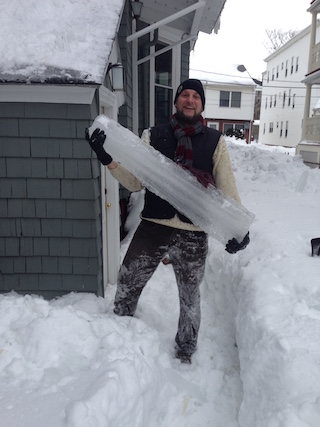 My neighbor Michael and I handling two separate sections of icicle of about 4 feet wide and with a diameter of 11 inches. Our comments in the moment were quite inappropriate. 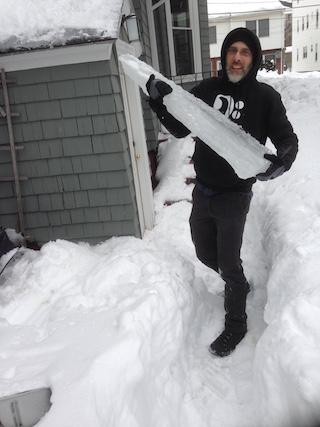 In the winter of the year two thousand fifteen my wife and I personally experienced what came to be called the snowpocalypse. We each had grown up in snowy places. As a man in his forties who grew up in *shiver* Buffalo, New York, I was used to cold and snow. From the tender young age of six I had leaned on and learned how to handle a snow shovel ( as well as a hockey stick, a windshield scraper). I had had the experience of warming bricks in an oven before a long journey to carry out to the car delicately in oven mitts, to be placed on the floor of a car in order to keep toes warm in a car with inadequate heating, and to apply liberally a thick coat of Caramex to lips prior to any outing in any month with the suffix "ber" or "ary".

Perhaps you think I am being dramatic, but these tales are true, and many more that strain credulity for anyone who has not lived a near half century of the fickle and alternately fiery and freezing weather of the less temperate climes of North America. Even for a city acclimated to snowy weather, it was one for the recordbooks as newspapers reported nationwide.

The wind was blowing a good 20 miles per hour while we were up here. We had to use an extendable 30 foot snow rake to get the snow off the dormers. My kind, patient, first-floor neighbor Michael and I amused each other with comparisons to climbing Mount Everest. We were exaggerating, but we were in some risk this winter on several other accounts. When an ice damn built up on the roof that kept snowmelt from draining into the gutters, it instead followed gravity and made it's way into the roof, and down the interior walls. With the same scenario occurring throughout New England, rooftop snow removal crews were backlogged for weeks and we had to do something. The spectacle before us was indeed snow-filled and icy. First we tried filling panty hose with icemelt or road salt and throwing them on the roof. These did not provide the necessary channels for drainage. It was in this way that we found ourselves in early March with the balmy temperature of 38 degrees (3.3 degrees Celsius) with the third story windows open as we leaned out with chisels, crowbars, and other implements of destruction to remove the icicles and ice dams.

Our heating bills were often greater than $250 in the frigid months of January and February. Our ice melt bill was always a minimum of $50 per month if there was snow or freezing temperatures. On seasons when we had a snow plow come in and remove the accumulation it cost hundreds of dollars a month, they often showed up late, once broke our fence and another time their truck broke down in our driveway, blocking us for hours. My budget for a new Christmas Camera once went to replace something called a heatpump. We often joined as a group to shovel together, the denizens of this Somerville Condominium alternately jovial at after shoveling drinking parties, and bitterly recriminative about the decision to not buy a snow blower yet another year.

Clearly, it was time for a change. After the third-in-a-row Monday storm of greater than 12" snow, and after a total accumulation of greater than 110.6 inches (280.924 centimeters) I found myself with a glass of Rioja in hand, applying for jobs in Los Angeles. Having visited California several times, and - at the urging of my tired-from-shoveling wife - we exclaimed together "Eureka!" and endeavored to find out some way to find our way to the Golden State.